This picture below is a picture of the build sticker from the passenger door of my car.  According the posts at SAABnet.com a SiS will say "Areo" or "Cabrio" and end with a 001110 if it is a SAAB 900 Turbo SiS.  This sticker proves that the car is one of the rare SiS models, it shows both. 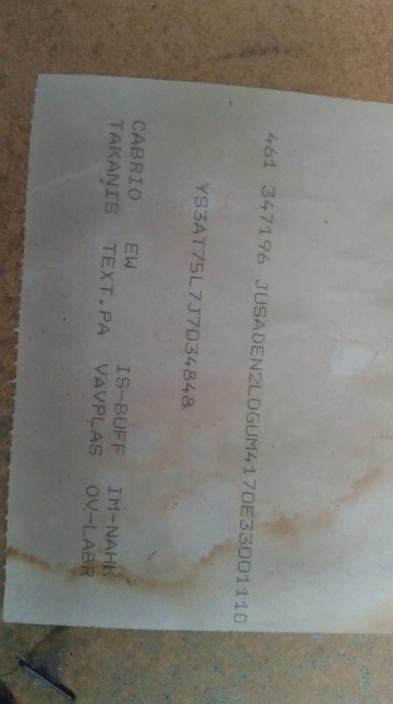 In 1988, Saab commissioned 288 special convertibles, one for each of its United States dealers, as part of the 1988 Dealer Meeting in Sweden. Dubbed the Springtime in Sweden, or "SiS" model these cars are differentiated by their Aero/SPG-like bodywork and 3-spoke wheels. Each car was painted black, with buffalo grey leather interiors and black convertible roofs. Each car was marked with a special "Springtime in Sweden" emblem that was attached to the lower left of the glove box door. The emblems were all identical and are not serialized. All were Turbo models.

Of the 288 built, four were automatics and the remaining 284 had 5-speed manual transmissions. Emblems on the exterior body were deleted in the scheme of the SPG, with only the word Saab and the Saab-Scania roundel on the trunk appearing on the car. The car was fitted with the standard Saab grille for the period, but did not feature the miniature "turbo emblem." The SPG suspension was not fitted, and aside from the SPG body fairings and dash emblem, the SIS is identical to a standard 1988 900 Turbo Convertible in the black/grey color combination.

The cars were sold, one to each dealer, however some dealers used the opportunity to trade their SiS convertible with other dealers in an effort to get other car models (specifically the 9000CD) for sale. Contrary to popular belief, the SIS was not given to the dealers for free. Dealers paid for their own car, the invoice price even reflected the increased cost of the SPG bodywork. Each dealer did however receive an Orrefors crystal vase, engraved with the Saab-Scania logo, packed in the trunk when the SIS was delivered stateside as a surprise gift.

Please note: Some individuals in an attempt to portray provenance of their vehicles, point to a sticker behind the driver side door card, that reads, in part, "AERO" and "CABRIO". This sticker was at one time affixed to ALL c900 convertibles and does not designate the vehicle as being of the SIS series. The only true/false indicator of an SIS is the inclusion of the glove box badge and/or the original window sticker.

Copied from SAAB 900 Article in Wikipedia